In 1987 human remains were discovered in a garden at Whitton, and, once it had been ascertained that they were ancient remains, a small excavation uncovered the remains of eleven individuals in an area 2.00 by 2.50 metres. 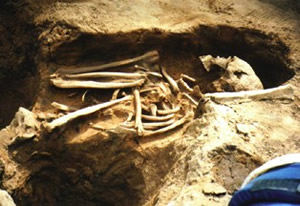 The burials were extended and aligned west-east, and there was no evidence for grave goods. The burials were located about fifty metres from the parish church, and it was suggested by the excavators that the burials were probably Christian, and possibly of later Anglo-Saxon date(1).

In August 2001 excavators from the Department of Archaeology and Prehistory at the University of Sheffield returned to the garden and excavated further burials, in an attempt to throw more light on the date and context of the burials.

It seems clear that the cemetery was in use for some time. Some of the burials excavated in 1987 cut other burials, a feature one would not expect in a short-lived cemetery. The recent excavations uncovered not only intact skeletons, but also much disarticulated and disturbed material. Some of the skeletons appear to have been disturbed or moved relatively soon after they were buried, because although the various parts of the skeleton were scattered they were still broadly articulated.The remains of at least five juveniles and nine adults were uncovered. This suggests that this was a lay rather than a monastic cemetery. One juvenile burial produced iron coffin fittings, one of which was a latch suggesting that the burial may have been in a chest – of a type excavated at Ripon and York Minster – rather than in a purpose-made coffin(2). Other iron coffin fittings, including brackets, and nails were found scattered around some of the burials, suggesting that there were other burials in coffins with iron fittings. This evidence suggests that some of the burials were relatively high status.

Samples of human bone have been sent for radiocarbon dating, in order to confirm the date of the cemetery(3).

Notes
1. Lincolnshire History and Archaeology, 23 (1988), p.82.
2. R. A. Hall and M. Whyman, ‘Settlement and monasticism at Ripon, North Yorkshire, from the seventh to eleventh centuries A.D.’, Medieval Archaeology, 40 (1996), pp.62-150, esp. pp.99-114; D. Philips, Excavations at York Minster, Volume I (2 parts) (1995), pp.83-84.
3. I am grateful to Sue and Phil Sibborn for permission to excavate in their garden and for the support and encouragement they gave us during the excavation, and to Andrew Chamberlain for his analysis of the skeletal material.